Various definitions exist when describing the term opiate but they all pretty much describe the same thing.  Some of the common definitions for an opiate include: 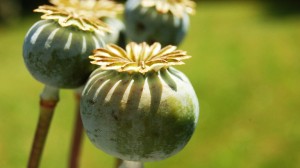 All of the definitions of opiates include the fact that the drugs are derived from the poppy plant.

b)      Something that induces rest or inaction or quiets uneasiness

c)       A medication or an illegal drug that is derived from the opium poppy or that mimics the effect of an opiate (a synthetic opiate).  Opiate drugs are narcotic sedatives that depress activity of the central nervous system, reduce pain, and induce sleep.  Side effects may include oversedation, nausea, and constipation. Long-term use of opiates can produce addiction and overuse can cause overdose and potentially death.

d)       Something that dulls the senses and induces relaxation or torpor.

f)       A drug, hormone, or other chemical substance having sedative or narcotic effects similar to those containing opium or its derivatives.