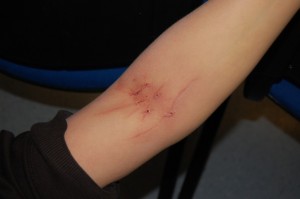 Needle marks are a sign of IV opiate use.

Opiates, including heroin and many types of prescription painkillers such as Morphine and Oxycodone, are widely abused throughout the United States. When an individual is abusing these types of drugs, he or she will often exhibit various signs of opiate abuse such as lethargy, changes in mood or abrupt changes in involvement with friends or family. Early detection of the common signs of opiate abuse can help you to determine whether further help is warranted.

According to the Center for Substance Abuse Research, “when used illicitly, the chances of becoming addicted to (an opiate) increase exponentially.” Prolonged use of opiates, especially those which have no known medical uses, can and often will lead to physical dependence and addiction which requires subsequent treatment in a healthcare setting. Pay close attention to the following signs of opiate abuse:

Also called track marks, users who inject opiates such as heroin intravenously will often exhibit needle marks on their arms, legs, fingers, neck or other areas of the body. In an effort to cover up the markings that are left behind, or sometimes to cover up the sores that result from infections following a dirty needle injection, many opiate users will wear long sleeves or pants during even the hottest months of the year.

Opiate abuse will cause changes in sleeping habits and eating habits. It’s very common for people who are abusing opiates to have very pale, pasty skin. Although this sign can be difficult to spot in someone who is already pale, the user will generally appear sick or otherwise unhealthy. Continued abuse of the drug will lead to an array of health problems in addition to the pale skin including infections and disease.

Opiates will cause heavy limbs and the telltale “nod” associated with heroin use. A user will often fall asleep at random times such as during a conversation or when it’s otherwise inappropriate. If you notice that someone you love is acting fatigued or lethargic, seems to have very heavy limbs or falls asleep randomly without cause—opiate abuse may be to blame.

People who abuse opiates will quickly ensue drug-seeking behaviors that take over their free time. Instead of spending time with friends or family, they will spend their time using drugs. Instead of spending time doing a hobby or otherwise having fun, the time is spent seeking more drugs or thinking about the next point of getting high. In time, the drug-seeking habits take over regular habits and interfere with everyday routines and living.